Here’s the problem…  Ducts are ridiculously difficult and frustrating to install.  It is a horrible, thankless job, much of the time, sweat pouring down the installer’s face in a 140 degree, cramped, dark attic space while wearing a particulate breathing mask to filter out the incredible amounts of dust and insulation fibers floating in the air.  Most HVAC crews assign this task to the lowest seniority and least qualified guy on the crew because nobody wants to do it.   The new guy has no idea about the importance of pulling the duct tight and creating a restriction-free, efficient system.

The installer is not the one that will pay for the increased utility bills.  He’ll be long gone by the time the homeowner realizes that a couple of the rooms in the house are a full 10 degrees hotter than the others.  He just wants to get out of that attic as fast as possible, and probably go, immediately to look for an easier career.

Inspectors in the past really didn’t know the effects of poorly installed duct work and many times overlook obvious problems.  They figure nobody is going to die over inefficient ductwork.  Most installers only concentrate on getting the job signed off according to “code” which is the absolute minimum standard, not the maximum standard of workmanship.  The builder or contractor is not going to pay for the higher energy bills caused by a poor installation so they really don’t care.  They want to do it as fast and as cheap as they can.  Therefore the duct system is more often than not, poorly installed and inefficient.   The US Department of Energy states the average duct system is only about 60% efficient.  Well, think about it, that’s 40% inefficient. How would you like to throw away 40% of your electric bill every month?  That’s exactly what is probably happening in your attic right now.  Over time, that’s a pile of money!

What if, for about $50 and an hour of your time, you could easily remove the restrictions in your duct system and get the comfort and energy efficiency your system should provide for you?   Also, you can reduce the stress on your HVAC unit making it work less, reduce breakdowns and make it last much longer?   Did you know, low airflow is the #1 cause of compressor failure?  It is.  Also low airflow is one of the leading causes of blower motor failure.  You don’t want one of these breakdowns.  They are not cheap to fix.

So, today, you can get the energy efficiency and comfort you deserve in a fraction of the time it used to take.  You don’t need any special training or tools.  You’ll also probably save more than the cost of the saddle system in just the first year.

The Duct Saddle Strapping System installs super-fast, using the existing strapping.  You don’t even have to disconnect the straps!  Using the patented strap channel, just lift the duct a little, slide the saddle onto the strap, lower the duct to ride on the load distributing saddle to smooth out the kinks and restrictions in your duct system.

Get yours today and start saving money and being more comfortable!!

This is a very typical problem.  Do you have certain rooms that are hot and others that seem to get all the cool air?

It’s pretty simple actually, your A/C unit is either cooling or it’s not.  If the unit is cooling but your still not feeling the comfort you expect, the answer could be very simple and inexpensive.  Solving this problem can give you the comfort you are looking for and save you A WHOLE LOT of money on your power bill.

If you call a heating and A/C company, what is the first thing they ask you?  Without question probably 100% of the time, you’ll get asked, “When was the last time you changed the filter?”  Right?  There is a very good reason for that.  Airflow is the most important ingredient to having a comfortable house, other than if the unit itself is working properly.

If your unit is cooling, more than likely your problem is AIRFLOW.  What good is it, if your A/C unit is making ice cold air, if it doesn’t get properly distributed to the living areas to keep you cool?   Did you mean to burn those $100 bills?

That’s where we come in.

The Duct Saddle Strapping System is exactly what you need to fix the kinks, sagging and restrictions in your duct system so the nice cold air your unit is making gets distributed throughout the home properly, so you actually get the benefits you are paying for.   Nice cool air and a comfortable house.  Not to mention you’ll save up to 43% on your electric bill.  Your run-times could be cut in half by proper air flow.  Also, the reduced stress on your system reduces breakdowns and extends the life of your unit.  Did you know the #1 cause of compressor failure is Low Airflow?  Low airflow is also one of the leading reasons for blower motor replacement.  Without proper airflow, these components are working twice as hard as they need to.  Combine that with extended cycle times and you have a perfect recipe for a breakdown.   The average new compressor bill is between $1350-1600.  A new blower motor is likely to run you about $600-750.  Ouch!

So, save your money, get a more comfortable house and save your system from an early death.  Get yourself some duct saddles, remove the restrictions in your duct system and let the air flow!!

Get yours today at www.ductsaddles.com

Do you avoid some rooms in your house because they’re uncomfortable?

Have you felt the air coming out of your registers?  Is it blowing out nicely or barely detectable?

Is your A/C constantly running?

Is your power bill too high?

Have you called an A/C repairman, spent $300 and it’s still no better than it was?

If so….you’ve got bad AIRFLOW.

Your unit could be working fine and cooling like it should, but the airflow is so restricted in your ducts, it’s not being properly distributed throughout your home.

Now, you can fix it in about an hour for about $50, with no tools required!

You can remove or improve the restrictions in your ducting system quickly and easily with the Duct Saddle Strapping System.   Just go to the website and watch the video and see how easy it is.   Go to www.DuctSaddles.com.   With a couple clicks, we’ll ship you out what you need to fix it and you’ll be more comfortable, save a whole lot of money, reduce breakdowns and extend the life of your system.   Get some right now and supercharge your airflow!!

Low airflow is a very common problem in HVAC systems.  Kinks and sags in your duct system create restrictions in your airflow that cost you A LOT of money and damage your equipment.

Low airflow is the #1 cause of compressor failure and a leading cause of blower motor failure.  Low airflow makes your system work much harder and much longer under increased working loads.  A new compressor can run you, on average $1350-1800.   A new blower motor is a $600-$750 job.  Not exactly a cheap fix.  You know its going to happen at the same time your car needs tires and your washing machine dies.  Don’t let it happen!!

Here’s how to tell if your duct system has restrictions.

If you detect any of these problems, you can do yourself a great service that will save you a lot of money and increase the useful life of your system.  Get the Duct Saddle Strapping System, straighten it out quickly, with no tools required, and you’ll be more comfortable and save yourself a lot of money and headache.   It’s easy!

Get yours today at  www.ductsaddles.com

Is your A/C unit working overtime?   I have family that lives in Houston and in Tampa.   I know how essential it is to keep the cold air flowing.  You really can’t live without it in those areas of the country and many others. 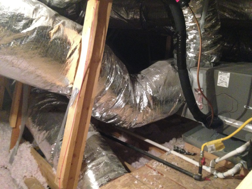 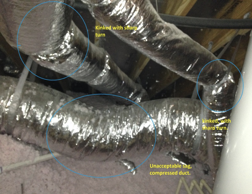 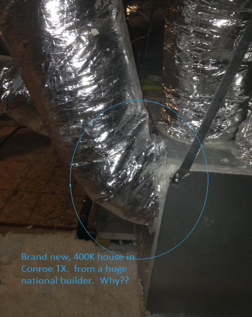 If your A/C is running 24/7 for months on end, that is a lot of energy being used and a lot of big electric bills.   The US Comfort Institute states that most duct systems are only about 57% efficient.  Well, that’s 43% Inefficient!   You could be burning $100 bills faster than you can change into a dry shirt!

Take a look at these pictures.   If your duct system has any of these typical restrictions, and chances are, it probably does, you could do your family a huge favor and make your house much more comfortable.  You can also save a bunch of money and dramatically extend the service life of your system by straightening out those saggy and kinked ducts.  Low airflow is the #1 cause of compressor failure and a leading cause of blower motor failure.  Replacing one of those is extremely painful to your pocketbook.

The Duct Saddle Strapping System is fast and easy to install with no tools required!

Get some at www.DuctSaddles.com and let the cold air flow, restriction free!  Mabye you could get a new putter and actually get some enjoyment from that next $100 bill!   Here’s to staying cool Efficiently!!

The Duct Saddle Strapping System has just been approved by the Building Performance Institute.  BPI is the leading product certification watchdog for the Green Building industry.

Would you like to make your HVAC duct system more efficient?  Pick up some www.DuctSaddles.com today!!